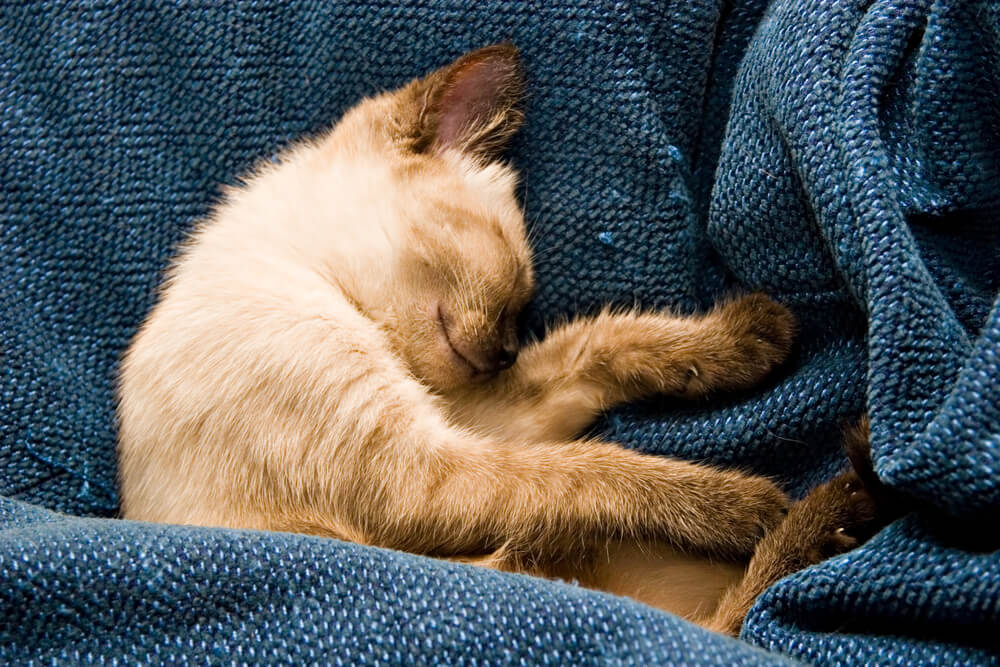 If you’ve ever owned a pet cat, then I’m sure that there have been times when your kitty has just seemed to be off in their own little world, doing things that nobody could quite understand. This can especially be seen during periods of intense playfulness or silliness, but the real question is whether these actions are being done out of pure joy or if they are actually dreams.

Cats spend around two-thirds of their sleeping time with their eyes closed and rhythmic breathing with occasional twitches – this is one of the best signs that your pet is dreaming. The muscles begin to relax as they drift into a deeper slumber, with most cats having vivid mental images playing before their minds. These images range from memories of playing to chasing prey and even hanging out with other household pets. But if you were to wake a sleeping cat right before or during this stage of sleep, they would be disoriented and confused – however, the effects would quickly pass as their mind adjusts from asleep to awake.

In some cases, cats may actually get up and move around while they are dreaming. They can appear very active in these moments, but it will usually be because they are chasing something in their dreams that has them so riled up. This is why our feline friends seem to suddenly jump up at nothing – it’s an action based on something they saw earlier in their dream state.

It is normal for cats to act like this when they’ve just woken up, but this may also be the case when they are in a deeper stage of sleep. They can even thrash around or vocalize while sleeping – there have even been instances where cats would actually run across the room like they’ve seen something shocking! This is called “oneiric walking”, and it’s another way that our kitty companions demonstrate their dream-like state.

Cats don’t just experience dreams when they’re in deep sleep either – sometimes you’ll see your pet cat chasing invisible prey during moments when she’s fully awake and well aware of what’s going on around her. In these cases, it is still believed that she is catching whatever it was that she saw in her dreams. This phenomenon has not been entirely proven, but it’s definitely a possibility.

All in all, there is no denying that your pet kitty is able to dream and they often do so when you least expect it. You may even catch them chasing their dreams and this behavior will be exhibited long after the moment of sleeping has passed.

In some cases, cats may actually get up and move around while they are dreaming. They can appear very active in these moments, but it will usually be because they are chasing something in their dreams that has them so riled up. This is why our feline friends seem to suddenly jump up at nothing – it’s an action based on something they saw earlier in their dream state.

So why do cats dream?

Actually dreams. Cats spend around two-thirds of their sleeping time with their eyes closed and rhythmic breathing with occasional twitches – this is one of the best signs that your pet is dreaming. The muscles begin to relax as they drift into a deeper slumber, with most cats having vivid mental images playing before their minds.

Can cats have dreams and nightmares?

When cats are asleep, they enter into what is known as Rapid Eye Movement (REM sleep) sleep. This stage of sleep is characterized by the fact that your cat’s eyes will dart back and forth rapidly behind their eyelids, which means that they are having vivid dreams.

Cats are able to process memories while they are asleep, which means that they can form new ones or refresh existing memories through what is known as “memory consolidation.” During REM sleep, your pet will be able to better remember things that have happened in their lives.

It’s also believed by many experts that cats dream of whatever it is they were most interested in before bedtime. If your cat loves chasing butterflies outside during the day, there’s a good chance she’ll be trying to catch one when she goes to sleep!

Do cats dream about prey?

It’s likely that once your kitty enters into the REM stage of sleep, their mind begins playing out images of all the things they saw earlier in the day – but it does not necessarily prey that your cat is dreaming of. If she happened to spy a bird outside, she may be running after it in her dreams instead!

Should I wake up my dreaming cat?

Since cats experience such vivid dreams during the REM stage of sleep, they may begin to vocalize or even thrash around as if they are experiencing something traumatic. If your pet begins making a sudden movement or a startling noise, you should try waking her up without getting too close. Doing so could cause them to become defensive and lash out against you – this is especially true if they were just dreaming about fighting with another cat!

If your pet wakes up from a deep sleep and begins walking around, it’s possible that they could be sleepwalking. When cats enter into the “slow-wave sleep” stage of their slumber, they become less active and will stop purring or even breathing for minutes at a time.

They may look like they’re completely out of it while this is happening, but in reality your kitty friend is very much alive and simply trying to conserve as much energy as possible during their time asleep. Sometimes you’ll see them twitch slightly or begin to walk in circles – these are activities that often occur when they start dreaming about hunting prey or chasing things.

Dreaming occurs during REM sleep which is deep sleep, not light sleep. It is likely that your cat can wake up from any stage of sleep including REM if you were to call her name or pet her. When a cat wakes up abruptly during a REM dream state, she may appear confused for a few seconds as she tries to determine where she was/what she was doing previously so it may seem like your kitty has awareness while sleeping but this is simply an artifact of having been abruptly woken up rather than proof of consciousness in dreams.

Cats do form memories while dreaming. However, they do not form new memories while the brain is in REM sleep because during this time there is no sense of input to inform anything that’s happening. It would be like asking someone to take a test after they’ve been wearing earplugs for several hours so nothing could get into their ears.

It is likely that your cat dreams of whatever it is she saw last before bedtime but cats also have some other common dream themes such as fighting with other cats, stalking prey and hunting them down, chasing mice or birds etc. All these activities occur while awake too (at least in the minds of cats). Being able to experience mental imagery while asleep can help cement experiences into long-term memory which makes future encounters more familiar and thus easier and faster to deal with.

What we do know is that cats show brainwaves during sleep which can be interpreted as dreaming of something based on the range of frequencies they display during a specific time period (such as REM sleep). It’s not as simple as observing some eye movement or muscle twitches like some animals because these animals don’t move their eyes around in dreams, nor do they make sounds while sleeping so researchers had to come up with some clever ways to determine if an animal was actually “dreaming” about something and not simply asleep and completely still.