how to tell if cats are playing or fighting? 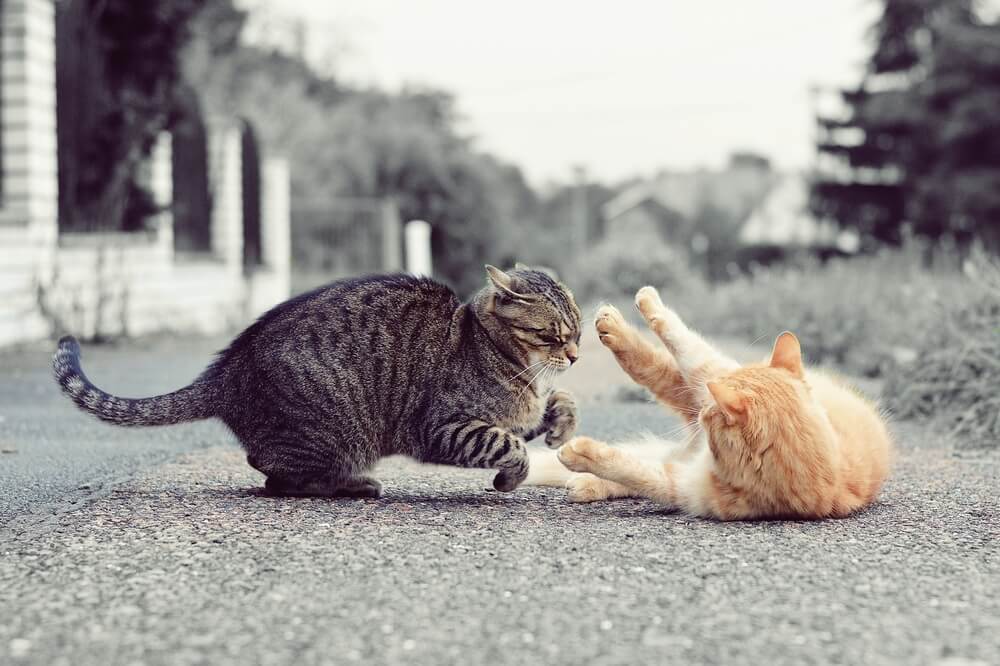 It’s a common question and, as with many things in life, the answer can vary depending on who you ask. By definition, we know that play fighting cannot result in harm, so it would be impossible to injure or even draw blood during an episode of play fighting.

However, some cat parents believe they see their cats playing fight and then, to their surprise, one of the cats is injured. If this has happened to you and your cat gets hurt, then your suspicions were correct: it wasn’t play fighting, it was a real fight.

On the other hand, we know that cats often exhibit behaviors that look like play fighting but are not. It can be difficult to tell the difference between play fighting and a real fight. This article will explore the reasons why cats may both pretend to be playing but can, at other times, actually be fighting. In addition, it will offer some advice as to what you should do if your cat is injured or gets hurt.

Cats are likely to play fight when they’re young kittens, but that doesn’t mean they always will. In fact, the activity is most common in cats from about 4-12 months of age because at this time it’s a very effective way for them to hone their predatory skills and establish the hierarchy of their social group. Once your cat reaches adulthood, you’ll likely notice that they engage in play fighting less often.

However, cats are predators. They’re born to hunt and play fight gives them the opportunity to practice for when they’re out in the wild — trying out different moves and strategies for pouncing, jumping, scratching, tackling, swatting, biting, hiding, etc. Therefore, even adult cats will still play fight, just not as often as kittens.

What Are They Really Doing?

So what really distinguishes play fighting from real fighting? Well, there are a number of key differences:

how to tell if cats are playing or fighting

Adult cats who are well socialized and living indoors with lots of positive interactions such as playtime and cuddle time with their owner tend to be much less aggressive than those that aren’t. If your cat is spayed or neutered, well socialized, and living inside with you, then their chances of getting into a fight are significantly lower.

If your adult cat starts to play fight with other cats (or even people), it’s important to consider the context in which the behavior occurs. If they’re outside all day in an environment without much human interaction, then the chances are much higher than they’re playing than if they’re living in your home and getting plenty of positive contact with you.

If your cat is engaging in scratching or biting play behavior with you, the context becomes even more important because it’s not very likely that they’ll redirect their playful aggression toward another animal unless you give them the right cues.

The Conclusion: Is It Play or is It Real? Playing or Fighting?

Some of the most important things to remember about play fighting is that it’s typically very relaxed and easy-going; there’s virtually no screaming, biting, hissing, or struggling involved. When cats do these things during a fight, you can be sure they’re really trying to injure one another.

The most important thing is that if you’re concerned about any interaction between your cats, make sure you watch the behavior of all involved for at least 30 minutes. If there’s no screaming or struggling during this time period and all parties seem to be relaxed and enjoying themselves, then chances are its play. However, if the interaction becomes much more aggressive and it’s clear that one or all of them are uncomfortable, then you should take steps to correct the behavior.

How to tell if it’s an aggressive sound or something else?

The more you play with your cat, the more accustomed to it they’ll become. In addition, when a cat is engaged in an activity that they enjoy and want to continue doing, they’re unlikely to feel much aggression at all.

Cats love being petted and if their family members are willing do it for them, then aggression is unlikely to be involved.

When cats are playing, you’ll see them gently grab onto another cat with their mouth. They won’t show any sign of exertion or straining when they do this and there won’t be prolonged biting involved either.

And finally, if your cat is engaging in play behavior that involves running away from you or another cat, they’re probably playing. If they’re being chased and there’s a lot of hissing involved, then you can be pretty sure it’s a real fight.

Cats love to play with one another and it’s important for them to have positive ways of expressing their energy and excess enthusiasm. However, if your cat doesn’t really engage in play behavior on their own and they only start playing when you play with them, then it’s possible that they’re frustrated by their environment or owners. In these cases, you should consider yourself lucky if your cat is playful at all and make sure to spend plenty of time playing, cuddling, and of course, petting them!

If I hear a purr in between a fight?

Yes, but only if it’s a long drawn-out purr. Cats are not very likely to purr during an aggressive interaction because they typically indicate that they’re uncomfortable or unhappy about something.

However, when cats are engaged in positive playtime with one another, you’ll often hear them produce a long drawn out purr as well. These purrs indicate that the cat is happy and content with what’s going on at the moment.

Again, it’s very important to watch a few different interactions between cats for a good half hour in order to get a better idea of the context in which the behavior occurs. This way you’ll have less trouble understanding whether or not your cat is having a good time or getting into trouble.

Is it more likely to happen to a male cat?

When cats are engaged in an intense battle, you’ll often see them hiss and scream to indicate that they’re unhappy about what’s going on. When this happens, it’s very unlikely that they’re actually enjoying themselves and playing with one another.

Although it may be true that female cats tend to engage in more aggression than males (especially if there’s only one male in the household), it’s actually quite rare to see a female cat behave aggressively during playtime. Overall, both females and males tend to engage in positive interactions with one another when they’re playing.

How can I help my cats not to fight?

The best way you can teach your cats how to properly interact with one another is to give them plenty of positive and gentle experiences. By allowing them to play with you, your family members, and especially their favorite toys on a regular basis, they’ll become quite used to playing without the need for aggressive behavior (or any at all).